Everything you need to know about Melbourne in a jam-packed 3-hour walking tour. 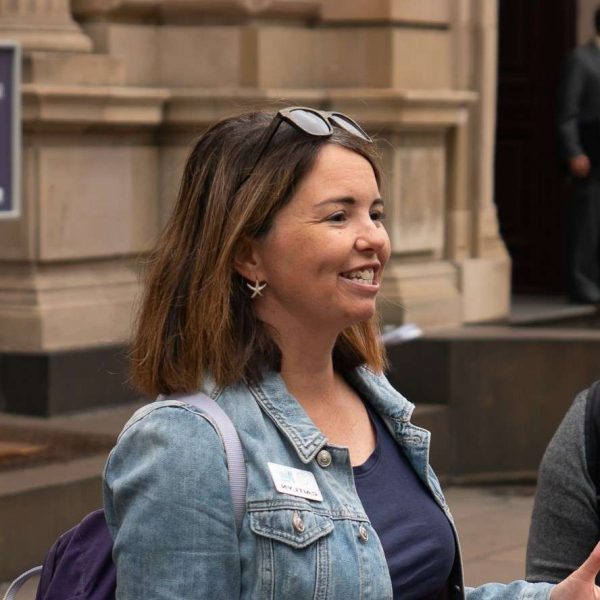 “This tour is so much fun, because it’s the complete story of Melbourne jammed into just three hours. I get to share everything from the city’s history to it’s architecture to the best way to order a coffee and my favourite street-art-filled laneways.”

Experience the best of Melbourne in just three hours. This “complete” experience is meant to tell the whole story of Melbourne in an economical time — from how we got to be known as the world’s coffee capital, to where the find the best street art.

Whether you’re a lifelong local or just passing through, our expert local guide will make you fall in love with Melbourne.

Your guide will entertain you with stories of Melbourne’s humble beginnings to the Gold Rush era that changed everything. Explore Chinatown and discover Melbourne’s multicultural edge. Hear us brag about the Melbourne cafe scene and then deliver the goods, as we buy you a famous Melbourne coffee! Finish up like a “fair dinkum” Aussie – at a pub of course! Let your guide grab you a cold beer (or soda/cider) and take questions and give  advice on other Melbourne highlights.

Meet your experienced local guide at Gordon Reserve, the perfect place to start amongst eye-catching buildings. You’ll receive a brief introduction before kicking off your Melbourne walking tour by learning about the beginnings of the city. Learn of the population booms of Melbourne – and how those very immigrants shaped the city.

Your guide will tailor the tour route to your needs and interests — want to focus a bit more on street art? Or would you rather take a walk around the Yarra? With small group sizes, we’re able to accommodate just about every need. Every tour will include a bit of the following:

Gold Rush Architecture + History: Discover how Melbourne became the richest city in the world as you walk amongst Gold Rush era architectural masterpieces. Your guide will reveal how the Gold Rush started and why it changed the city forever.

Melbourne Laneways + Street Art: Visitors to the city say this is their favourite thing about Melbourne. Traverse in and out of Melbourne’s intricate laneways and gaze upon the ever-changing street art. Find the hidden bars and laneways that even Melburnians don’t know about.

Melbourne Arcades: Walk through some of the oldest arcades in Australia to get a glimpse of how Melburnians used to live and shop (and still do if you’re after a $400 candle holder!). Arcades were a showpiece of Marvellous Melbourne and thus its high-end architecture is something not to be missed!

Chinatown: Visit Melbourne’s Chinatown, one of the oldest in the world. We will tell you the restaurants to come back to after the tour!

Melbourne Coffee: We won’t just tell you about how our coffee is the best in the world, we’ll give you the chance to try one yourself as we visit one of Melbourne’s best cafés! As you’re sipping on a “flat white” or “long black” we’ll tell you how Melbourne’s Coffee Culture became the envy of the world.

Old Melbourne Gaol: After passing all our regular stops we will then go directly to jail! However, it is now a university, some would say that’s not much different! Here we will recount the story of one of Melbourne’s most famous sons, Ned Kelly, in vivid storytelling. Hear how a common criminal became the complex legend that he is today!

Your tour begins at Gordon Reserve (74-108 Spring St) – this is a park with a fountain and is located across the street from the Windsor Hotel.

What to Bring
Cancellation Information

Cancel up to 24 hours prior for a full refund

We're rated #1 on Trip Advisor.
Come see what all the fuss is about.

Book Now
"Just finished Bar tour with Hayden.. great guide, great knowledge and great bloke.... was a delightful experience in Melbourne and would have no issues recommending this tour for locals and tourists..."
Andrew Maher
"Was a great way to get out and walk around our great city and discover bars that you never knew where there. Hayden was terrific and really informative and had lots of fun. Would highly recommend taking a walk.'
Angela
Google Review
"We did the Melbourne bar tour with John and had an amazing time! John was so friendly, knowledgeable and really made the tour something different! Highly recommended, 10/10 would do again!"
Ethan Jones
"Thanks to Beau and the team for a great afternoon out. Dylan & I had the best time finding some amazing new places."
Natalie Aitken

What time does the Complete Melbourne tour end?

Plan for three hours. We finish the walking part of the tour around 2.5 hours in, then settle in for a drink (included) at a local pub.

What should I wear?

Dress like you’re going to be outside for 3 hours. Comfortable walking shoes are a must!

How much walking will there be?

Expect about 3km of walking on this tour

How big are the groups?

We cap our group size at 12 people to ensure each person has the chance to have a personal experience with the tour guide and one another.

Can I bring my school group/office/etc?

Of course! Feel free to book on a public tour, or if you want your very own chartered tour email us via the contact page!

Your tour begins at Gordon Reserve (74-108 Spring St) – this is a park with a fountain and is located across the street from the Windsor Hotel.

Our mission is to offer walking tours that make our guests feel like they’re being guided by their new best mate who always knows the best places to go.

Made with 🍕 by Ground Zero Digital